Underweight on IT, bullish on power: Vinay Paharia 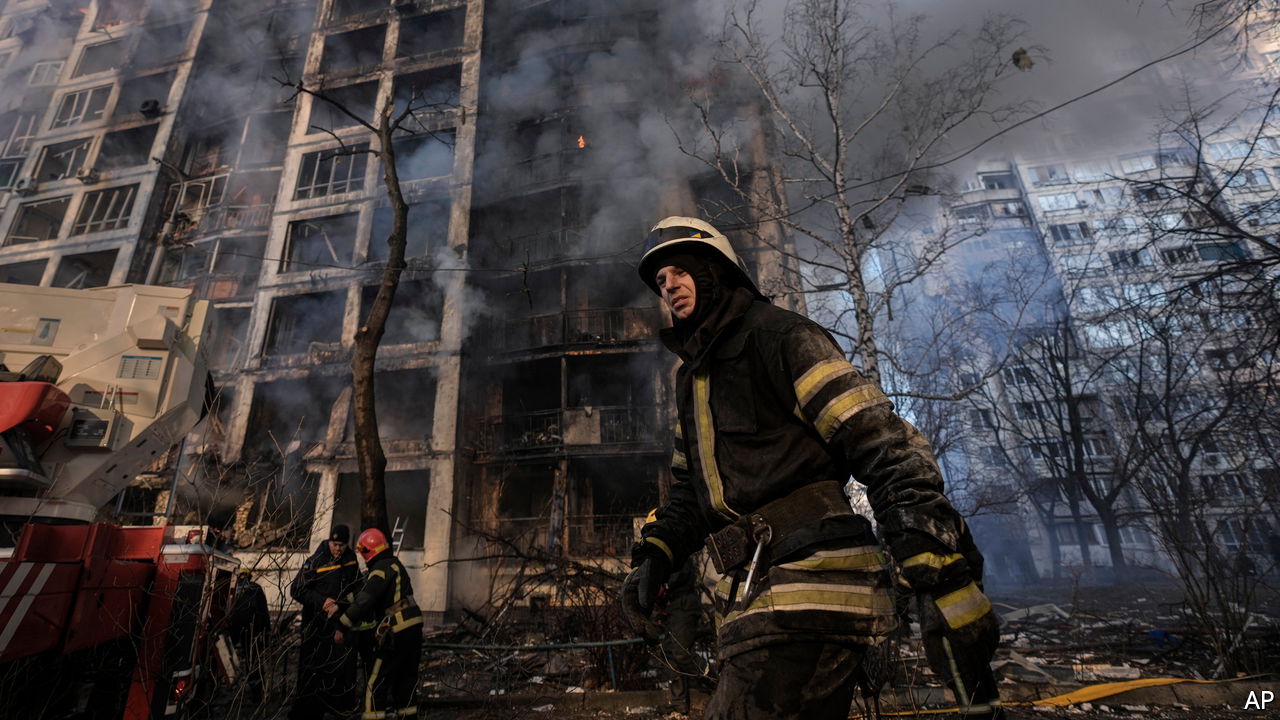 THE MISSILE struck the 16-storey apartment block in the Sviatoshynskyi district in the early hours of the morning on March 15th. For hours, the telescopic ladders of fire engines worked to rescue people trapped by thick smoke and leaping flames. One victim, already zipped into a black body-bag, lay on the ground under her burning home. Paramedics bundled an injured woman, her jaw hanging open in shock, into an ambulance. “The babushka (granny) has only a one percent chance of surviving,” said a medic, clambering out of the ambulance after administering frantic treatments for ten minutes.

Since the Russian invasion began on February 24th rockets, missiles, bombs and artillery have almost entirely spared Ukraine’s capital, hitting only suburban areas, and airfields, outside the city limits. But a series of strikes on civilian targets beginning on March 14th, perhaps including explosions from missiles shot down by Kyiv’s air defence system, indicate that this period of grace may be over.

Although Russian soldiers are not believed to have made meaningful advances towards the city centre for more than a week, the bombardment has turned up the pressure. “Their plan is to wear us down through intimidation and exhaustion,” says Serhii Kuzan, head of the Ukrainian Security and Co-operation Centre, a think-tank.

To the north-west and north-east of the capital Ukrainian forces are fighting tooth and nail to hold back the Russian invasion, and whole small suburban towns are being laid to waste. Critically, they have largely succeeded in keeping Russian artillery out of range of the city centre. As a result, for many in Kyiv, the war has been more of a distant rumble than a reality—until now.

Some 25 minutes’ drive north-west of the centre, the Russian advance has been halted at the town of Irpin. In the north-east a convoy of advancing tanks was stopped at Skybyn on March 10th. Since then thousands of residents have fled the Russians, some pell-mell and others in organised convoys.

On the morning of March 14th a missile hit another block of flats, in the northern district of Obolon, killing two. A few hours later yet another missile smashed into a nearby street, destroying parked cars and a trolley-bus and killing a pedestrian. Within an hour of that strike electrical engineers were at work reconnecting severed and dangling cables.

No one knows for sure if these missiles are aimed at military targets and have missed, or are designed to sow panic by hitting civilian areas at random. If panic is the aim, it is not working. “I have never so much as killed a chicken,” said Vladislav, a 52-year-old unemployed electrician, who was watching television when the second missile struck on March 14th, “but now I’d kill that Putin bastard.”

The battle of Kyiv risks turning into a long, drawn-out affair, says Mr Kuzan. Initial Russian plans to knock out crucial government buildings followed by a lightning advance and then a triumphant march into the capital were scotched by Kyiv’s solid air defences and by Ukrainian forces that are both more motivated and more mobile than their lumbering foes. The Ukrainians have succeeded, at least until the past few days, in keeping most of the invasion force held up on the main arterial highways to the north of the city rather than fanning out around it.

Kyiv has been spared frequent missile attacks up until now because its air-defence system, which surrounds the city in concentric circles, has worked well. As for the invasion force itself, Russian troops are operating with old Soviet doctrines and are slow to adapt to new circumstances. For the Ukrainians good intelligence has also proved crucial. It helped to foil plans to decapitate the government through targeted assassinations, for instance.

Until the Maidan revolution of 2014 and the beginning of the war in the east of the country, Ukraine’s intelligence services were shot through with Russian agents; but since then, says Mr Kuzan, many of them have been rooted out. This has changed the course of the war and has kept the president, Volodymyr Zelensky, alive and the Russians out of Kyiv. “Our intelligence has informants in every Russian military unit and in Moscow,” says Mr Kuzan.

The Ukrainian authorities have told journalists not to reveal the locations of what they have seen, but it is clear that artillery is being dug in around Kyiv. Mobile missile-launchers are also being deployed. The Ukrainian army has been conserving its forces for what feels now like the impending battle of Kyiv. Supermarkets are depleted but food has not run out. All utilities in the capital are still working and morale remains high. But a 35-hour curfew, which went into effect on the evening of March 15th, points to the fact that the city authorities fear more strikes are likely.

If Russian forces break through the current front lines the attack on Kyiv will begin in earnest. It risks being bloody and long. Under the burning block in Sviatoshynskyi, Oleksiy Goncharenko, a member of parliament now dressed in military fatigues, says that the Russian effort to sow terror will fail: “They are aimed at making us surrender, but that will never happen!”■

Our recent coverage of the Ukraine crisis can be found here.

Underweight on IT, bullish on power: Vinay Paharia

It has to be growth plus value: Vetri Subramaniam

Grayscale sues SEC after its spot Bitcoin ETF is rejected