Amid demands for stronger actions against investee companies lagging in moving to zero emissions. 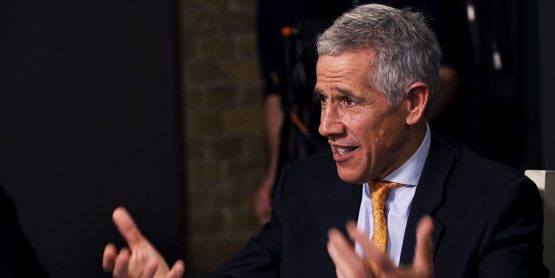 Ninety One CEO Hendrik du Toit had to answer difficult questions and deflect criticism at its AGM on Tuesday, as shareholder activist organisation Just Share questioned the asset manager’s strategy with regards to its investments in companies that are seen to lag in their response to climate change, sustainability and equality.

As part of her questions, Just Share executive director Tracey Davies stated that Ninety One should act decisively against companies that are slow to adapt their operations to counter climate change, calling for it to disinvest from such companies.

“Ninety One stated previously that you expect companies to furnish plans to be carbon neutral by 2030 or face consequences. But the consequences are not set out,” said Davies.

“Scientific evidence calls for immediate action, not a slow pace of transformation.”

‘Constructive engagement vs chaos and resistance’

“We have engaged on this before, and we value your input,” Du Toit answered, “but we believe our strategy of rather engaging with the companies we invest in will bring real transformation that is practical and realistic.

“A lot of companies have published plans on how to transform and set transformation targets. We hope that they will beat their targets and change faster.

“We need real change. If we only tick boxes and only supply information as required, it won’t change anything in the real world.

“What we can do is to analyse if companies keep their promises. We follow a strategy of constructive engagement,” said Du Toit.

“Speed is necessary, but disinvestment as such is not the solution.

“Disinvestment will only change ownership and put it in the hands of people who doesn’t care much.”

“It is important that companies manage this transition. For example, starving a coal mining company of capital will have a huge impact on the surrounding community.

“It will be chaos if you simply force a coal mine to close and there will be huge resistance from communities against climate change strategies.”

Ninety One states without any reservations that the world must get to net zero, he said, adding however that “Some companies will be faster than others.”

Du Toit pointed out that companies in developed economies will be able to change faster than businesses in developing countries.

Lorena Pasquini, senior climate risk analyst at Just Share, said that while the logic behind the argument against divesting from high-emitting companies sounds compelling, there are many more nuances than currently acknowledged by investors and asset managers.

“The use of appropriate escalation strategies is critical for investors seeking to advance previously unsuccessful engagements, or to trigger and/or accelerate action. There must be meaningful escalation tools available, and a clear process to use these.

“Divestment is one such option. As capital is withdrawn from a carbon-heavy world, it ought to be redirected towards incentivising and supporting a low or zero-carbon world.”

Pasquini said there is no guarantee that engagement will result in real-world carbon emission reductions, particularly on a timeline commensurate with averting the most severe impacts of the climate crisis.

“It’s another reason why we ask investors and asset managers to take a firm stance,” she said.

“In essence, we are asking Ninety One [and other investors and asset managers] to consider adopting a similar kind of strong and courageous stance to the one Ninety One has on controversial-weapons, for which it has a firmwide exclusion policy.

“Climate change, after all, will also cause immense harm.”

Read: Shareholder ESG support down but not out, researchers say

Ninety One’s sustainability report that was published as part of its annual report suite said that its role as an asset manager and its active fund management strategy has a unique role in facilitating the allocation of capital to support the shift to a more sustainable future.

“To fulfil this role, we look to invest sustainability through inclusive capital allocation, rather than divestment,” said Du Toit in his foreword to the report. “The world is in great danger of catastrophic climate change. But there is cause for hope.”

The report seems to try to cut through popular, emotional arguments, noting that energy production causes about 75% of global greenhouse gas emissions, but “the world does not yet have sufficient safe, cheap, clean energy alternatives for all of its people”.

“Finance on a massive scale is required to ensure a timely and inclusive transition to net zero.

“As a global investment manager with roots in an emerging market, we know that if we are to achieve a permanent curb on emissions, every place and all of the world’s 7.9 billion people must be included,” according to the report.

Nazmeera Moola, Ninety One’s chief sustainability officer, said that Ninety One believes no one should be left behind in the drive to net zero.

“There have been rapid advances in the development of carbon and net-zero transition datasets. The good news is that over the last 10 years the impact of environmental, social and governance [ESG] factors on investments has become much more widely considered.”

She said the abundance of carbon reporting has however led many asset managers and investment funds to focus on reducing carbon emissions of their portfolios to measure progress in addressing climate change.

“In so doing, they may fail in their responsibility as capital allocators to encourage swifter climate action,” said Moola.

“There is a vast difference between reducing portfolio emissions and reducing emissions in the real world. To drive real-world climate action, we need to focus not on today’s carbon emissions, but on transition pathways – that is, we must hold companies accountable for implementing plans that will achieve real-world emissions reduction,” she said.

Ninety One states in its report that it is willing to work with all companies and countries, particularly emerging nations, that are committed to the net-zero transition.

“That includes the solution providers developing the technologies that will free the world from fossil-fuel dependence; the well-run companies with good governance and solid sustainability credentials that will drive the economy of tomorrow; and the high-carbon emitters with viable plans to significantly reduce their emissions,” said Moola.

However, the report also said that Ninety One listens to its clients and segregated portfolios can exclude specific companies, sectors or countries from portfolios on the basis of ESG concerns.

Just Share notes that asset managers such as Ninety One play an important role, because they have undeniable influence with companies and with investors of capital.

“We would like to see asset managers such as Ninety One increasing their leadership role, which will inevitably require difficult and courageous decisions,” said Pasquini.

“We are encouraged by the willingness of Ninety One to engage on these important matters, and we hope to see Ninety One increasingly place itself at the forefront of a wave of real-world changes.

“We would be really interested to learn more about the engagement strategy and work that Ninety One has held with its clients [investors] to support the redirection of funding from a carbon-heavy to a low/zero-carbon world.

“Engagement is not only necessary with companies and governments, but with the ultimate owners of capital too,” she added.

Just Share said that Ninety One is one of the leaders driving change.

“The survey findings reveal that while there are encouraging signs of local asset managers adopting the necessary approaches to successful, effective climate risk integration, relatively few of them demonstrate excellence when assessed against international best practice standards,” she said.

“Those that do align with international best practice do so in some areas, but not in all.

“Ninety One, together with Old Mutual Investment Group and Aeon Investment Management, were found to the leaders. The same three managers were the three top performers in the first annual ESG 27four asset manager survey in April this year.”